via Membership BADDges: Identifying ADHD in Girls with Co-morbid Anxiety

+1 for everytime you’ve locked yourself out of anything

+1 for not having friends from college because you never did remember their names.

+1 if you got thrown out of the Jolly Tinker for jumping in when your anonymous English Lit compratriot got in a scruff over a pool game. +100 if it was Summer 1990.

ADHD can be tough. Meds aren’t a panacea. Therapy isn’t a panacea. Life hacks aren’t either. Together though, you have some semblance of a chance of dealing with it. I guess the goal is to get back to normal, whatever that is. Thing is, getting back to normal tends to be a bit underwhelming. I think I, and maybe, you, if you’re a fellow major depressive ADHD on the intattentive side, expect to just KILL IT all the time. I do, especially if I’m doing due diligence. Really though, instead of killing it all over the place and dominating all things…”success” is going for a bike ride. Getting a resume out in time. Reading. Being a good husband and Dad. Just your normal daily things. And that’s where this documentary is playing out, Measured in coffee spoons.

Indeed there will be time. No? Ci!

Its funny, I read the Lovesong of Alfred J. Prufrock so many times in my youth. I think, today, I understood it for the first time. Age and wisdom and all that I guess.

So, say you’re trying to download some music from your Amazon music cloud (or do whatever is you do that’s you doing you) on your Android device and you get the message:

You click through and… wha? What screen overlay? What app? In my case it was Twilight, a blue light filter app on my phone. I paused it for a minute and ta da, downloads galore.

At first blush, I really thought I had this cool idea to relate dwindling resources, scarcity and self destructive self-advancement to programming in Python. This post is the post where that’s supposed to happen. It was going to be clever. It seemed like a great idea, to blend poetry and programming — OF COURSE!  I was sure I could write about something about limited resources and algorithms that, sure you can implement, but really cost you in time and tie it in to the “Scarcity” poem in the other post.

In both cases, we’re talking about increasing costs. On the computational side, this can be expressed in Big-O notation, which indicates how well an algorithm scales depending on it’s input size or how many ‘things’ it’s given to operate on. 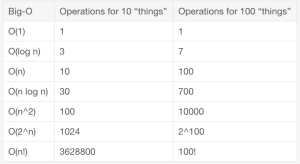 Being that pulling teeth is painful and you only have 32 of them to ‘sell off’, I’d peg it w an expensive operation like O(n^2). This is exponential growth. If the units are dollars, you might be able to swing that $1024 for ten teeth, but all thirty two is gonna cost you $4,294,967,296

What’s lacking though is the detrimental, personal impact of a compromised values system that ‘In Scarcity We Bare The Teeth’ is driving at.

Totally mismanaging development of a neighborhood, being so greedy to ‘eat’ that you sell your teeth off (and let’s throw the tongue in there, too.) doesn’t really jive with a poorly written algorithm. The life value cost correlation isn’t there. While there might be some situation(s) that contradict this — I’d say that running a brute force implementation of the ‘small world’ problem or ‘traveling salesman’ problem doesn’t result in the visceral impact of not being able to enjoy life anymore.

I was basically avoiding what I felt the tie in was, really. That wasn’t it. It’s pretty shallow. Then I started writing some more, trying to figure out and express what made me think I could tie these two things together — and by talking about Python of all things. That had been my vague idea at the onset.

So I thought about it a little more and started writing, again. The draft I was coming up with kept turning not to Python per se, but the time when I first started using Python — circa 2004 and the circumstances around it. I started writing about a time I left a job with a short, 5 minute commute for one with  1.5 hr one (18 times longer) and a 40% increase in gross pay. While, as stated in this article, the bump was exactly enough to justify the switch, I certainly didn’t count on the +12 to 15 extra work hours per week nor did I weigh the physical, social and mental costs of it that piled up.

In scarcity, we bare the teeth
selling them off one by one
appetites in search of the highest price
no longer able to smile at or chew on
what it means to live the good life.

As I wrote — I didn’t like the tone I was developing. Sure, I went for the “highest price” and it didn’t work out. — but think it’s unfair to beat myself up about it and try to hammer personal experience to fit a comparison to poem. I took a job. I didn’t sell off parts of my soul, one by one willingly and I think I can still smile and chew on the good life. 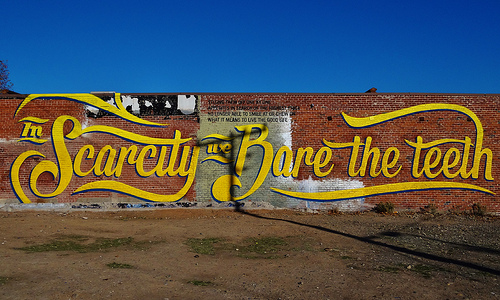 Like art should, this particular installation has struck a chord with me. Sometime in the fall of 2013, this blank brick wall in the shabby lot in the shabby neighborhood suddenly had this compelling mural with an oddly compelling message. I didn’t even see the body of the poem at first. It’s in black paint, ALL CAPS and centered above the script “B” in Bare. I can’t say I’ve gleaned its meaning completely but it’s something that I like to ruminate on. It builds and bears repeated viewing.

Eventually, I found some more murals / installations and figured out something had to be going on.

Of course, if you play Ingress, these art installations are all very much contested portals that you can hack along w the slew of others strewn all along the way there. Deploy, recharge, mod, link and hack to your hearts content. Link up the street portals w their neighbors of course, but don’t be a yutz and just YOLO link. Look to throw links north and east from there. Green links & fields preferred. If you are not an Ingress agent  — it’s a cool way to discover new and different parts of your city and travel destinations you might overlook otherwise. Choose a team (Enlightened is my personal and biased recommendation), run through your tutorial and get involved in the community in your area.

Next: The segue from cool public art installations in an area that needs some revitalization to Python and some other tech related stuff.